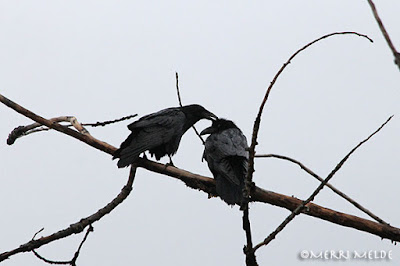 The answer to “Do Ravens Mourn?” is yes. They do.

Throughout the day Sunday, I occasionally heard Aida begging for food in a random tree or on a random hillside, and knew when Edgar was feeding her by the excited caws she gives off while he puts food in her mouth.

In the afternoon I heard a very strange noise I’d never heard before, and I hunted it down, or rather up. In a tree, Aida was snuggled close to Edgar, grooming him, giving off low, tender rumbles. Edgar sat still, accepting the caresses, and, I swear, looking sad. 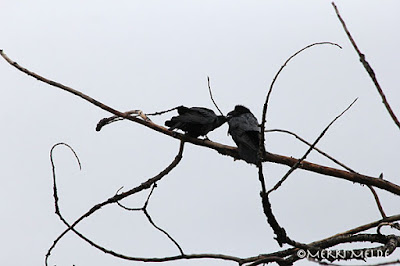 At times they would fly to the nest tree, sometimes sitting and snuggling together on a high branch; once I saw them fly to the tree and sit on the rim of then nest, looking in, as if to see if anything had changed, or as if to think, well, what now?

I threw dog food out in the evening; Edgar flew down and gobbled up the bits. Aida flew in, landed a few feet away, and as Edgar walked up to her, she gave her excited food call and crouched and fluttered her wings as he fed her, just as they’d done in the nest for the last 2 weeks.

Ravens are believed to mate for life, so maybe these two will carry on together, stay in this area, and try again to nest here next spring.

I’ll know for sure it’s Aida by her unusually high-pitched voice, and by Edgar, who lets me come close and talk to him. 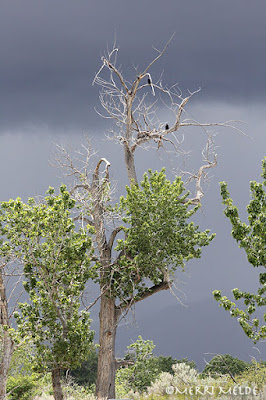 Yet another storm coming through on Sunday. 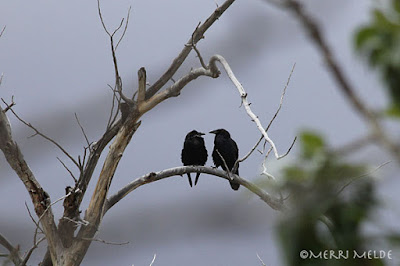 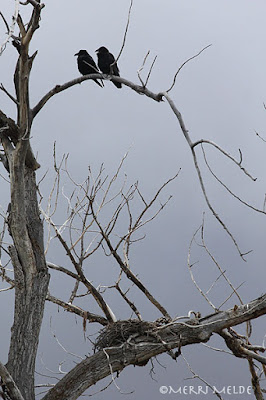 Posted by The Equestrian Vagabond at 4:44 PM No comments: 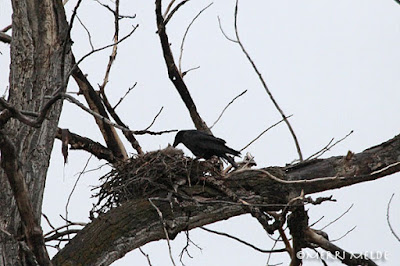 It all started spiraling down with this crazy unseasonably cold weather. Terrible winds for a few days, cold… and then the cold rains came (and snow down to the foothills of the Owyhee mountains!)

Throughout the day Aida brooded continuously on the nest and spent much time rearranging things in the nest, moving nesting material as if to dry out. Edgar fed her on the nest several times. Only around noon did I see one baby poke its head up for food, but it seemed weak.

Several more cold rainstorms blew through during the day. Either Edgar or Aida continuously brooded the nest and appeared to be busy inside it (fluffing things up? drying things out? trying to resuscitate babies?). Near 6 PM Edgar was away; Aida briefly took off from the nest and returned shortly with food; one open mouth reached up and she fed it, then she settled back down on the nest.

At nightfall, Edgar bedded down on a branch right next to Aida on the nest, something he hasn’t done for some time.

10:40 PM: a terrific Raven Ruckus got me up and out of bed, Edgar and Aida caterwauling about something, on and on, caw caw caw. I trekked to the nest tree with binoculars and with a slight moon could hear her on the nest and see him on a branch, facing upstream. Between their hollering I could hear a great horned owl female up the creek; were they attacked by an owl? (About 2 weeks ago both Ravens shot off the nest in the evening and made a beeline for a great horned owl sitting on a distant ridge, with Aida giving off her alarm calls.)

The Ravens quieted down and I went back inside, and again at 11:30 another terrific Raven Ruckus. It was 41* and rained again during the night.

This morning: nest is abandoned.

I walked around the bottom of the nest and saw nothing (it’s very brushy so unlikely I’d see anything anyway).

As I was walking back… there was Edgar, sitting on a log on the ground. “Well, hi Edgar, are you OK? What happened last night!?”

I fetched some dog food and set it out; Edgar flew down to it while Aida hollered in the tree (not the nest); then she joined him on the ground, and I could hear her excited “Feed me!” voice.

I think it’s too late for them to try nesting again, other Raven nests have fledged by now. Do Ravens mourn? There are stories of Corvid funerals. Are Edgar and Aida mourning their 4 lost babies? I’m pretty sure they know I feel sad for them.

Will they stick around, now that they have no commitments here? 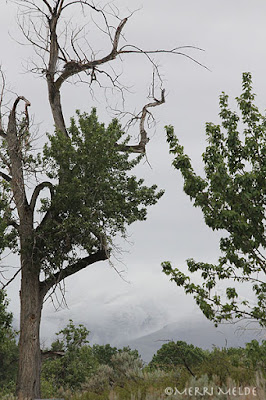 the weather that started the calamity 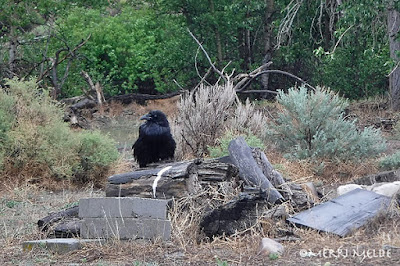 Sitting on the ground and talking with Edgar this morning

Posted by The Equestrian Vagabond at 8:18 AM No comments: 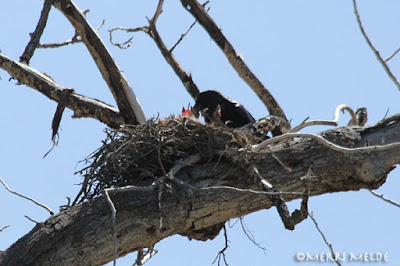 Sunday for the first time I heard Raven babies in the nest!

The nest is far too high for me to see in it, but Sunday, when Aida flew back to the nest with food (Edgar was perched on a side branch supervising and playing Protector), 4 tubular bald pink heads reached for the sky, huge mouths gaping open waiting for morsels.

Any time a parent caws nearby, the 4 pink gaping stalks shoot up, and if no morsel is forthcoming, they flop or wilt back down out of sight. It’s tiring being a baby Raven!

Every day they all get just a wee bit louder, and a wee bit hungrier… 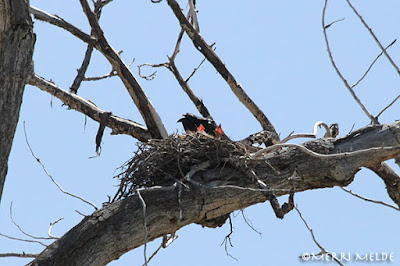 Posted by The Equestrian Vagabond at 12:10 PM No comments: 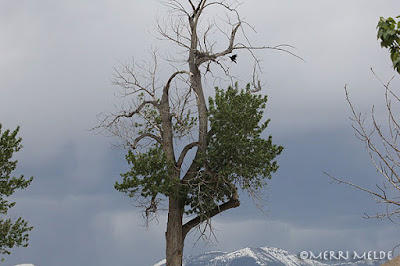 Mother Nature's throwing everything she's got at the nesting Ravens: rain, vicious wind storms, wilting heat (at times you can see them panting on and near the nest).

And still the nest stays secure and they raise their babies. Edgar most often does the hunting and feeding, though sometimes he will settle down on the nest as Aida flies off to eat (or chase red-tailed hawks).

I know they have at least two on the nest from the angle the parents' beaks turn when they feed down into the nest, but so far I still haven't heard them or seen one fluffy down feather!

Posted by The Equestrian Vagabond at 7:14 AM No comments:

Yes, We Have Baby Ravens! 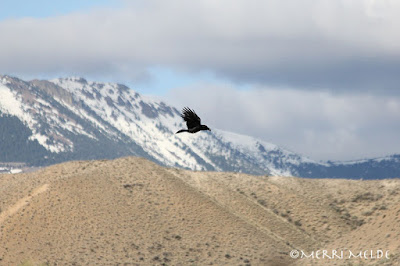 The giveaway was the night Edgar spent sleeping in the nest tree. Usually he sits in a tree about a hundred yards away. That, and Aida no longer makes the excited gargling when Edgar flies to her on the nest to feed her. Now she's quiet. Probably so as to not draw too much attention to the nest.
It's been sooooooo windy that we can't hear any baby Ravens... but do they make any noise right away?
We estimate the egg/s hatched on Thursday May 8. That evening was Edgar's first to bed down in the nest tree, with, as usual Aida on the nest.
They don't seem to be crazy busy feeding babies yet; no way to know how many of the eggs hatched. But watch closely, and you definitely see (mostly) Edgar flying to the nest and feeding *something* in there besides Aida. 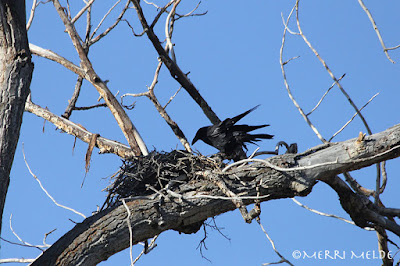 Posted by The Equestrian Vagabond at 10:44 AM No comments: 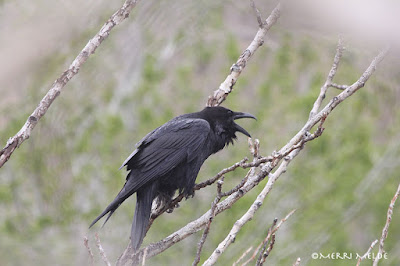 Ravens will incubate their eggs 18-21 days. Near as we can figure, Aida possibly started laying eggs somewhere around April 13... if so then today would be 21 days, so, any day now the little guests might start to arrive! (Oh, for a nest cam up there.)
Aida probably laid from 4-6 eggs, which will be greenish, and marked with browns and olive. They're about 2 inches in length, about the size of a (yummy) chicken egg.
Normally the female incubates the eggs and Edgar will fly to the nest and feed Aida, but they do switch off occasionally. Sometimes she goes to forage (possibly Edgar has found something yummy, perhaps cow afterbirth), and it's easier for her to fly to the yumyums and eat her fill. He'll sit on the nest while she's gone, and if she's gone too long, he'll start calling for her. One day she didn't answer for quite a while, either she was stuffing her face, or needed a good break!
She will also instantly dart off the nest in pursuit of a nearby predator (hawk) - CawCawCawCaw. Edgar may or may not fly to the nest; he might sit nearby so as to not tip off the hawk to the nest location. Or, he may protectively fly to the nest and pop on it if danger is close. 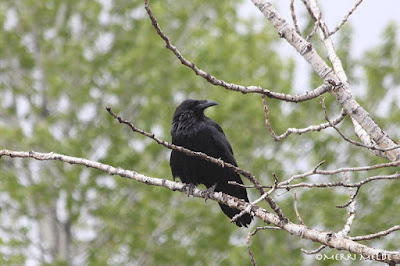 Posted by The Equestrian Vagabond at 3:28 PM No comments: 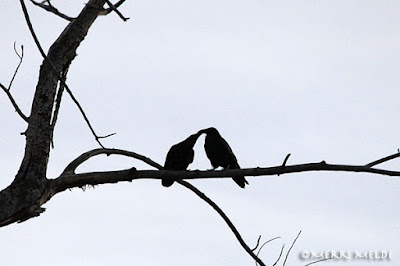 At the end of a long day of Aida incubating her eggs, and Edgar searching for and gathering food and feeding Aida on the nest, as the sun sinks over the mountains she hops out of her nest and snuggles up to Edgar and they give each other a goodnight kiss before she walks back to her nest and hops on her eggs.
Raven Love! 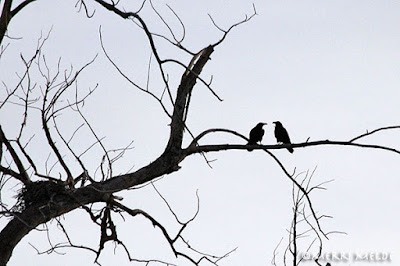 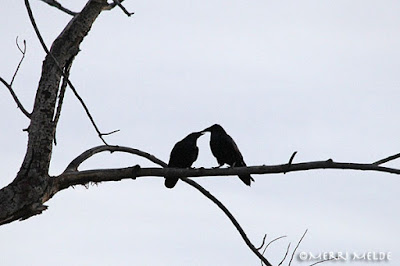 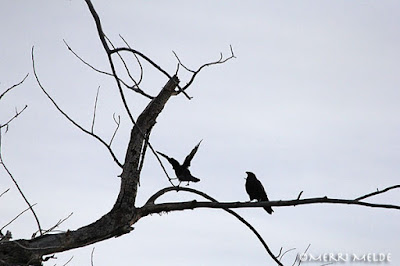 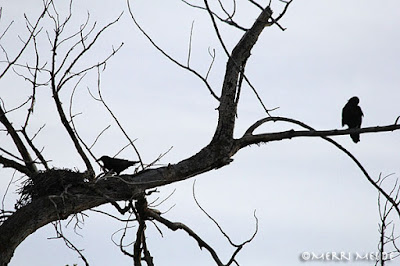 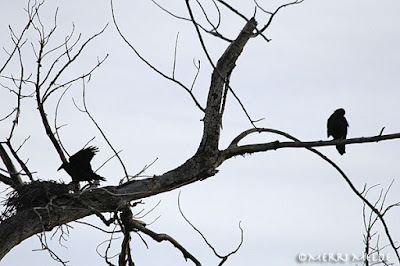 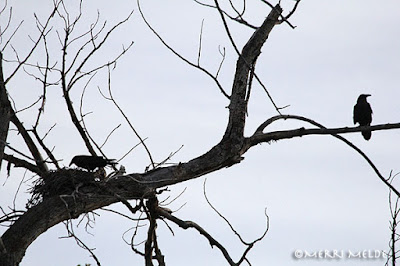 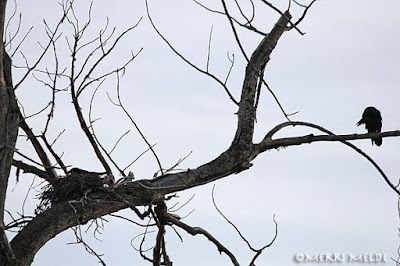 Posted by The Equestrian Vagabond at 5:36 PM No comments: 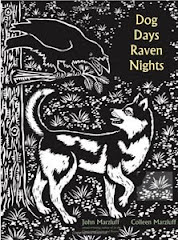 Raven studies by John Marzluff and his wife Colleen

Raven: A Trickster Tale from the PN 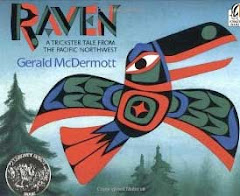 one of The Raven's Favorite Books! 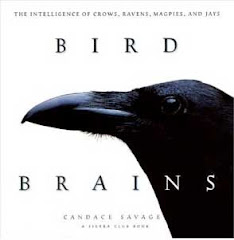 Mind of the Raven 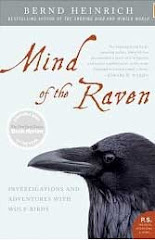 Bernd Heinrich knows how smart we are! 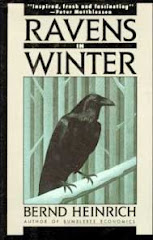 Clever in winter too!